Everything You Didn’t Know About Wasps

No one is thrilled to see a wasp nearby, but they are one of the most fascinating creatures in the insect kingdom.

We see about a dozen here in Utah, but worldwide, wasps species number in the tens of thousands.

You can tell a wasp from a bee by the fact that wasps have a narrow waist or “petiole.” Also, they don’t have body hair like bees.

While bees are famous for their wax, which is valued for various items needing beeswax, wasps instead will scrape wood fibers to create a fibrous nest like paper. It’s one reason that certain species of wasps, like hornets, are often found near trees where wood fibers are plentiful. Unfortunately, it’s also why wasps choose places like attics and porches to build nests. 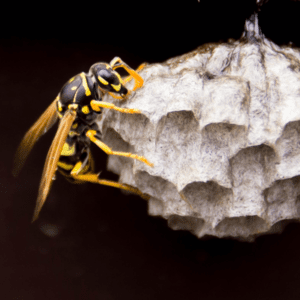 These areas contain boards that are perfect for making a nest. You can prevent this problem before it starts by getting a perimeter pest management spray. This will create a defense line around vulnerable areas like the cracks of a foundation, porches, etc. And it prevents other creepy crawlies besides wasps.

Wasps Are Social Or Solitary

Wasps can live in social hives or on their own. Most species we see in Utah are social. These include yellow jackets and hornets. Solitary wasps include tarantula hawks. Social wasps rely on their stingers to protect themselves and their hive, while solitary wasps use their stingers for hunting prey.

Wasps Can Sting More Than Once

Unlike bees, which can only sting once, wasps can repeatedly jab a creature they perceive as a threat. Interestingly, only female wasps can sting, and this stinger is actually a modified egg-laying organ.

Wasps Are Natural Predators For Many Pests

While bees feed on the nectar of flowers, wasps need meat. They will hunt and kill many bugs that humans deem “pests.” Thus, they are a great natural defense. That being said, they belong outdoors where they can control these pests – not indoors where they can sting our families and us. Sometimes, the lone wasp will find its way in – especially during late summer when wasps seek out nests.

Swat One Wasp, Two More Will Take Its Place

When you kill a wasp, it can release a pheromone that will cause other nearby wasps to become aggressive. That’s why, as tempting as it is to swat a wasp that’s getting too close, it’s better to walk away, or you may have more than one wasp to contend with.

While hives are filled with female workers and, of course, the queen wasp, there are male wasps called “drones.” Their job is to mate with the queen. In late summer, they fertilize select females who will become new queen wasps. After fertilization, the drones will die, and the females will find a place to hibernate during the winter.

Once those fertilized females are done hibernating the following spring, they will lay eggs that become female workers. Once these workers are adults, they will continue expanding the nest into the characteristic hexagonal combs, so the queen can continue laying eggs. At the peak of summer, a nest can be as large as 5,000 wasps. New drones and fertile females form, mate, and go off seeking new territory. The original queen, and all her workers, will die off when winter arrives.

As we’ve touched on above, wasps don’t rely on the nectar of flowers for their meals. Instead, they will catch and kill other insects to eat. A particular favorite is the larvae of other species.

There are several varieties of these stinging menaces in Utah.

Yellow Jackets – the most common wasp and the most recognizable. They are attracted to sweet smells, which can cause problems for fruit trees. They are also highly aggressive and will attack things they view as a threat.

Hornets – Similar in appearance to yellow jackets, but they are far less aggressive. You’ll often find them near trees.

Paper wasps – Two common varieties we see in Utah are Western and European paper wasps. They have the same colors as yellow jackets but with thinner bodies. Sometimes, they 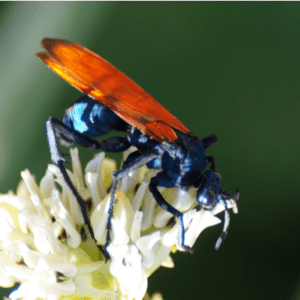 can be dark brown, red, or orange in color, as well.

Tarantula hawk – At two inches in length, tarantula hawks are the most formidable of wasps. They are solitary, so you won’t find them in large hives, and they are blueish-black with orange wings. And if you’re wondering about the name, yes, they do indeed hunt and kill tarantulas. While they aren’t as common as yellow jackets and hornets, they have been spotted in Utah.

Since 1983, the professional exterminators at Ferta-Lawn have provided pest control services to Salt Lake City and the surrounding area. We apply a perimeter treatment, using insecticides that will serve as a line of defense around your home to prevent all manner of creepy crawlies, including spiders, ants, wasps, earwigs, millipedes, roaches, and centipedes. Discover what hundreds of other homeowners have already enjoyed: a pest-free home! To learn more about what we do to keep the bugs away, call 801-295-3057 or contact us online.

We have over 25 years of caring for nature’s finest resources, trees. Regardless of what is plaguing these beautiful lawn ornaments, Ferta-Lawn has the knowledge and expertise needed to ensure their successful growth.

Weed, insects, and other pests destroying your yard? We have the sprays to eliminate whatever is wreaking havoc on your lawn, including insect control, weed control, and perimeter sprays.

Obtain the lush green lawn you deserve without spending all your valuable free time on yard maintenance. At Ferta-Lawn, our expertly trained technicians understand Utah lawns. We will care for and treat your yard as if it were our own.